Sweater update for you all : I wasn’t happy with the jogless joins I had done on the sweater stripes yesterday so I frogged 2 stripes (12 rounds) back to where it wasn’t bothering me. I finished redoing them today and added another stripe of colour but now I’m not happy with the way I’ve carried the yarn between stripes of colour. It’s possible I’m just being extra fussy. So I’ve put it down for the moment and got the rainbow shawl out again. When you want to take the scissors to a project in a negative way, it’s time to put it aside for the night and start again on it tomorrow.

To be honest, I want to be working on an older unfinished project but my bag of unfinished projects (yes, i have a bag full) had to be moved into our loft. It’s not conveniently located and the husband has to be sent on an expedition to find it.

Which he will be doing tomorrow 😉

I did my meditation knitting in the early morning quiet today but I do have some music to share with you.

The Ukulele is generally not considered a particularly serious instrument, a bit like the recorder, that anyone can pick it up and make a somewhat tuneful noise, as evidenced by both being readily available cheaply in toy stores. I achieved my Fourth Grade music certificate in the Recorder. It sounds much nicer when it a) isn’t played with your nose, and b) it is used to play more classical music than you were given in school and there is a lot written specifically for the Recorder, including a part in one of the Brandenburg Concerto’s! The Ukulele is the same – give someone with the knowledge of how to play it some good music and you get something nice. Give it to someone creative and you get something awesome.

The Ukulele Orchestra of Great Britain do that something awesome – many of which are covers of popular music. Not just interesting ukulele playing but some fantastic vocals too. You should look them up. They’re pretty easy to find on the web, YouTube, Facebook and Twitter. They’ve covered ‘Teenage Dirtbag’, ‘Pinball Wizard’, the theme from ‘Shaft’, and ‘Ride of the Valkyries’ among many others but my favourite is their version of David Bowie’s ‘Life on Mars’ but it’s more than that. How many of the duet songs can you name? (and don’t just read the comments to find out!)

Today’s square was actually another trapezoid. Tomorrow I shall attempt to square the tops of the two trapezoids off with a triangle. 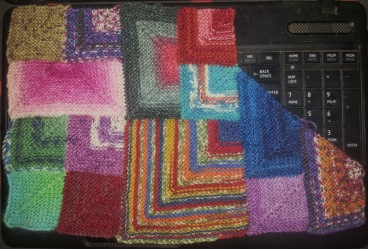 Tomorrow I will square the angled sides of the trapezoids with a triangle. At least, that’s my plan.