**Written 2 days ago but I forgot to hit ‘publish’. *facepalm* I have now finished all 10 of the pink hexagons! Yay!**

Oops. Didn’t realise how long it was since I wrote. Kept meaning too but the days have all sort of blurred together.

The second hexagon in my Quarantine project blanket has been something of an adventure. Adventure? Maybe circus would be better. The sort of circus where the monkeys are loose, the elephant is juggling the clowns and the ring master is drunk in a corner muttering about wanting to be an accountant. Nobody gets hurt, we’re all very confused and it is implicitly agreed that we will all pretend it didn’t happen.

I finished the 10 required red hexagons from the last post in 3 days, gave myself a couple of days break and started on the next one – ‘Chrysanthemum’ in pink. Finished one but it was all wavy which means that the ratio between stitch height and stitch width is too big for the shape you are trying to create (too many stitches for the space you’re filling). Checked the pattern and tried again the next day (count with me – attempt #2). Same result. 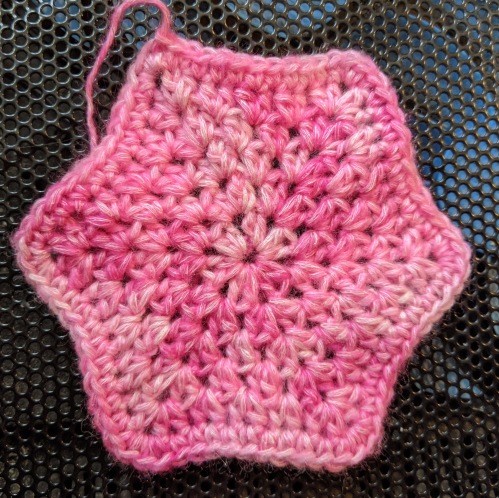 Attempts 1 & 2 looked like this… Pretty but not quite right.

I got distracted by World of Warcraft, Easter, and trying to get my 3D printer to behave, before coming back to the yarn today. I checked a couple of websites and decided to try again with a larger hook in the middle where everything was lying flat before changing back to the original hook size (#3). Better but still wavy.

Then I realised that while I had recognised the pattern used American terms, I had been using the wrong stitch after all! So. The pattern wanted ‘dc’ – double crochet in the US is called a ‘treble’ in the UK. But I was doing neither. For some reason I was doing a half double crochet/half treble stitch (which is shorter and thus causing the wavy problem!) Sorted.

Ripped back one of the earlier efforts and made it properly with my 3.5mm hook. It laid flat and looked lovely…. and was too big compared to the red hexagons I’d already made (attempt #4). 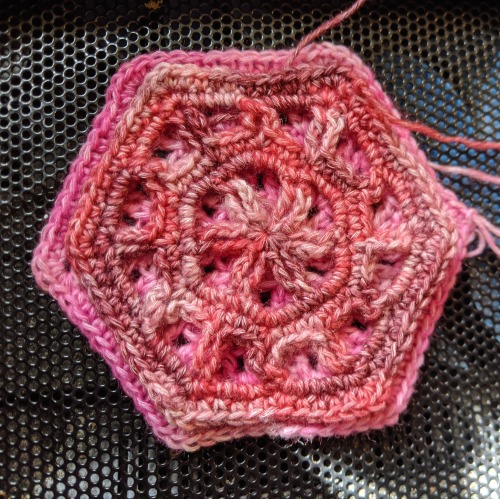 Yay for straight edges! Boo for the wrong size! Attempt #4. 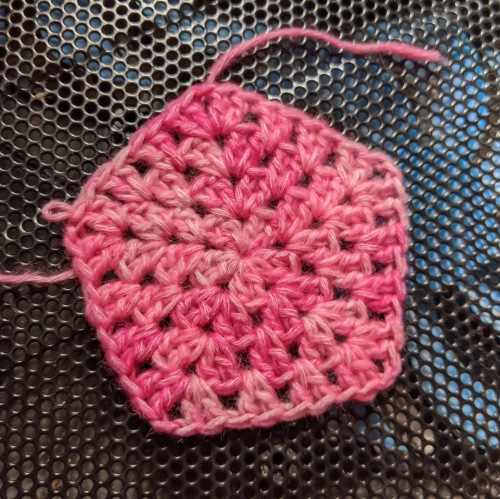 Ripped back, started again, triple counted the first round to make sure I had the right number of corners – Success!!! 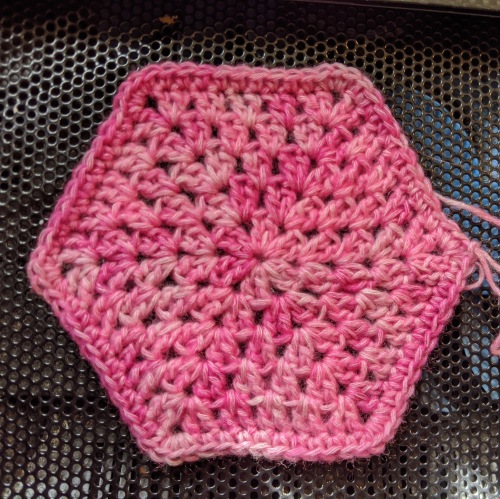 The sixth times the charm. That’s how that saying goes, isn’t it? 😉

Six. I tried 6 times before I got this embarrassingly straightforward pattern right. Not entirely sure what message to take from all of this because there are several to be had but I think the first thing to address is how flighty my thoughts still are. I’m not feeling particularly negative about being stuck indoors at home all the time, or sleeping any differently to normal (though that’s not particularly great anyway) – it’s not that different to how things are without the lockdown. I think I’m eating better. I’m interacting with real persons – albeit virtually but given the circumstances, it counts. I don’t know what’s going on but it’s all a bit odd at the moment, isn’t it? 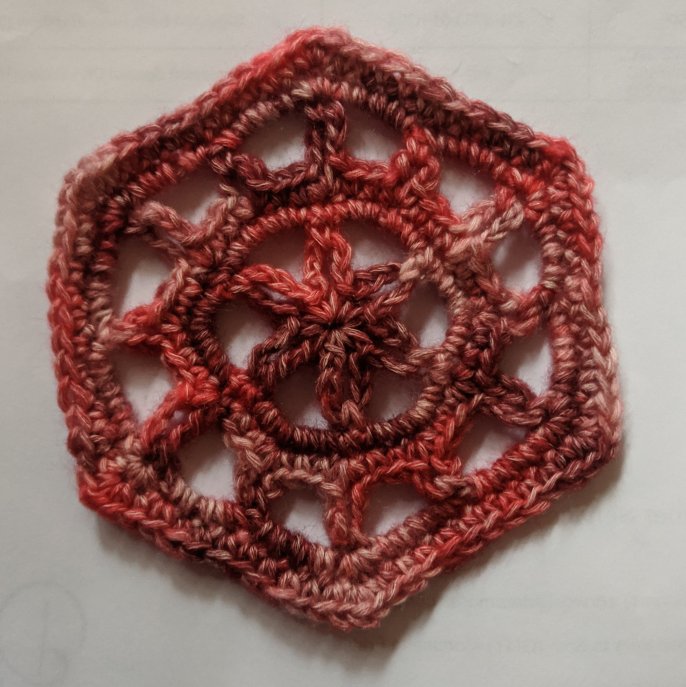 No, I’m not actually sick and a lockdown is not the same as a quarantine but as the first 2 weeks of the lockdown came to an end I was starting to feel a little frustrated. I don’t go out much anyway but I’ve never done well with being told I can’t do something. Plus, my dogs are loud and sometimes I just want to get drive-thru to get out of the house. Can’t do that when everything is closed. (I have absolutely no issues with the lockdown itself. Public safety and well-being is so important and COVID-19 is largely avoidable. Though the response was a little later than it could have been in some ways, I think the UK government has and continues to do a good job. Also, with high blood pressure, I am in a higher risk group so, yeah. I’m staying in, thanks.)

Anyway, 2 weeks in and I was starting to feel the effects of cabin fever so I went to the Deramores website to look at all the pretty yarn. I wasn’t actually sure they were still trading but was also looking at yarns for a shawl for my mother (more about that in a later post). Whether they were still selling or not, it’s eye-candy and it pleases me. But they are still selling (though their usual 2-3 day delivery is slowed to 7-10 days), which means yarn was bought. The yarn pack I bought was for a ‘Tiny Garden‘ blanket (designed by Rachele Carmona – find it on Ravelry) made using crochet hexagons in Scheepjes ‘Spirit’ yarn (cotton/acrylic so no allergic reactions for me!)

Scheepjes yarn is quickly becoming a new favourite of mine. I’ve used several of their yarns now and they are always lovely. I am finding the slight halo on this particular yarn a bit frustrating though because as I pull yarn to work with from the centre, it catches against itself and the fluffy bits sort of felt together. They pull apart fairly easily but it’s a bit of a nuisance. As I use the yarn, this seems to be less of an issue. I guess that with the lower density in the middle of the ball there is less friction on the strands.

I’m calling this a Quarantine Project instead of a Lockdown Project because I’m going to attempt to finish it in forty days. 82 full hexagons, 12 half-hexagons, 16 small triangles and fitting it all together. The biggest distraction I face is World of Warcraft but given that the hexagons take about 30-60 minutes to complete (depending on stitch complexity and my general attention span), getting a few done every day won’t be a strain.

(I’ve read through this twice now and I *think* it’s coherent. The fact that I’m not entirely sure of that shows just how short my attention span is and how poorly my brain is doing with being forced to stay home. Please let me know if it’s nonsensical so I can fix it :))

NB: I am not affiliated with the pattern designers, yarn company or Deramores. I earn no money or payment of any kind for this post.